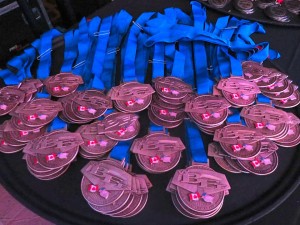 We don’t know who we are until we see what we can do. – Martha Grimes

Whoever wants to reach a distant goal must take many small steps. – Helmut Schmidt

It’s easier to limit yourself, but if you do, you will never reach your true potential. – Chris Witty

People with clear, written goals, accomplish far more in a shorter period of time than people without them could ever imagine. – Brian Tracy

I don’t wait for moods. You accomplish nothing if you do that. Your mind must know it has got to get down to work. – Pearl Buck

The best way to keep charged up is to do what’s been nagging at you. – Susan Bishop

No matter what accomplishments you achieve, somebody helps you. – Althea Gibson

People of mediocre ability sometimes achieve outstanding success because they don’t know when to quit. Most men succeed because they are determined to. – George Herbert Allen

Behold the turtle, he makes progress only when it sticks its neck out. – James B. Conant

With confidence, you can reach truly amazing heights; without confidence, even the simplest accomplishments are beyond your grasp. – Jim Loehr

Remember that there is one thing better than making a living – making a life. – Anonymous

Sometimes it’s important to work for that pot of gold. But other times it’s essential to take time off and to make sure that your most important decision in the day simply consists of choosing which color to slide down on the rainbow. – Douglas Pagels

Sweet is the cologne of accomplishment. – Heywood Hale Broun

Nothing splendid has ever been achieved except by those who dared believe that something inside of them was superior to circumstance. – Bruce Barton

I’m lazy. But it’s the lazy people who invented the wheel and the bicycle because they didn’t like walking or carrying things. – Lech Walesa

Some men dream of worthy accomplishments, while others stay awake and do them. – Unknown

God put me on this earth to accomplish a certain number of things. Right now I am so far behind that I will never die. – Bill Watterson

Discipline is the bridge between goals and accomplishments. – Jim Rohn

The greatest things are accomplished by individual people, not by committees or companies. – Fay Weldon

Sweat is the cologne of accomplishment. – Heywood Hale Broun

Failure is not fatal. Failure should be our teacher, not our undertaker. It should challenge us to new heights of accomplishments, not pull us to new depths of despair. From honest failure can come valuable experience. – William Arthur Ward

Some of the world’s greatest feats were accomplished by people not smart enough to know they were impossible. – More Doug Larson Quotes

There is no such thing as can’t, only won’t. If you’re qualified, all it takes is a burning desire to accomplish, to make a change. Go forward, go backward. Whatever it takes! – Jan Ashford

No one rises to low expectations. – Les Brown

Let us not cease to do the utmost, that we may incessantly go forward in the way of the Lord; and let us not despair of the smallness of our accomplishments. – John Calvin

Accomplishments have no color. – Leontyne Price

Nothing builds self-esteem and self-confidence like accomplishment. -Thomas Carlyle

Hell, there are no rules here – we’re trying to accomplish something. -Thomas Alva Edison

To accomplish great things, we must not only act but also dream. Not only plan but also believe. – Anatole France

Organization doesn’t really accomplish anything. Plans don’t accomplish anything, either. Theories of management don’t much matter. Endeavors succeed or fail because of the people involved. Only by attracting the best people will you accomplish great deeds. – Colin Powell

The best people to listen to are those who have already been successful accomplishing exactly what you are seeking to accomplish. – Brian Koslow

Nature does not hurry, yet everything is accomplished. – Lao Tzu

As for accomplishments, I just did what I had to do as things came along. – Eleanor Roosevelt

A man’s accomplishments in life are the cumulative effect of his attention to detail. – John Foster Dulles

Mistakes are the stepping stones that lead to future accomplishments. – Unknown

The greatest doer must also be a great dreamer. – Theodore Roosevelt